History of the Burse

The Deutsch-Nordische Burse in Kiel is a student residence that is committed to the idea of ​​bringing students from the Scandinavian, Baltic, other European countries and Germany closer together.

The old Deutsch-Norische Burse located at Düsternbrooker Weg 14 in Kiel and the first house was run by the Stiftung Deutsch-Norische Burse, which was established in 1928. The basic idea of ​​this foundation was completely different from the principles on which today's Burse is based. The founders of the "Stiftung Deutsch-Nordischen Burse" pursued the goal "... der auslandsdeutschen Jugend den Besuch der Hoch- und Fachhochschulen Kiels zu erleichtern..." (... to make it easier for young people from abroad to visit the universities of applied sciences in Kiel ...") (preamble to the first foundation constitution). The other paragraphs also show that the main focus was clearly on "foreign German students" and that the nation-connecting element was not important at all.

The house on Düsternbrooker Weg was bought in 1929, especially for the northern Schleswig and the three Baltic states and their German social stratum. After only 10 years of existence, the house was confiscated by the Navy in 1939 during the war and then totally destroyed in April 1945. 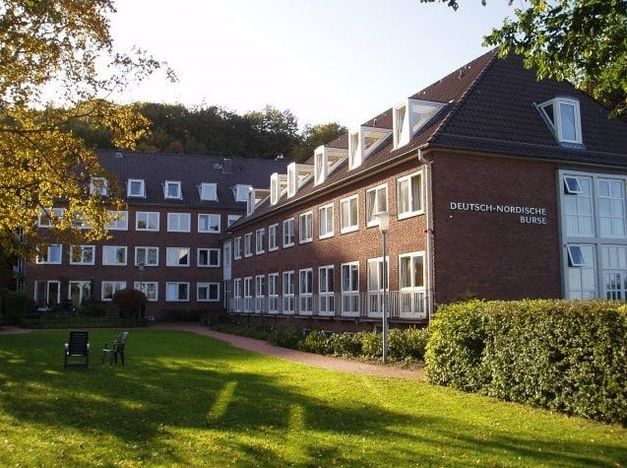 After the decision to found a new Burse, however, it would take a few more years before it could be inaugurated. After tough negotiations the time had come October 19, 1967, and the foundation stone for the new Deutsch-Nordische Burse at Kiellinie 81 was laid by Minister of Culture Claus-Joachim von Heydebreck.

The first occupancy of the new home took place two years later. In 1986 the attic of the front building was expanded and the number of residents in the house was increased to 87 people.

In 1978 Dr. Willi Nielsen handed over his position as CEO to Dr. Hans-Ulrich Johannsen, who is still CEO. In 1979 Dr. Nielsen founded the Förderkreis Deutsch-Nordische Burse. In 1988 he resigned from the board of the foundation as an active member and was also appointed honorary chairman.